History of the building:

The Terrazza Umberto I, original name of Bastione San Remy, built between 1899, and 1902 and designed by the urban engineer Giuseppe Costa and Flugenzio Setti, is to be placed in the historical context of the end of the XIX century, between the neoclassical and Liberty styles. Adding a sense of magnificence to the urban setting, the reorganization of the fortifications (S.Caterina and Zecca) which took place at the end of the XIX century. The fortifications, which rise at different levels, border the southern section of the Castello quarter. The project’s aim was that of linking the higher quarter, administrative center, to the lower suburbs, in an era in which the Castello quarter was losing importance. Interestingly, the works, which lasted about half a century, were completed in coincidence with the construction of the present townhall, in the coastal area of the city, when the Castello quarter lost its administrative function. Following several attemps to assign alternative uses to the complex, it finally turned into a terrace open to the public, which commentators of the time described as the Cagliaritan “Partenone”. Below the terrace, we find the “Passeggiata coperta“, consisting of an archade with three cross valuted naves which along the years found different uses, such as school and an exposihtion hall. In 1943, bombardaments damaged severely the magnificent staircase, destroying the central arch which was then restored to its original state. 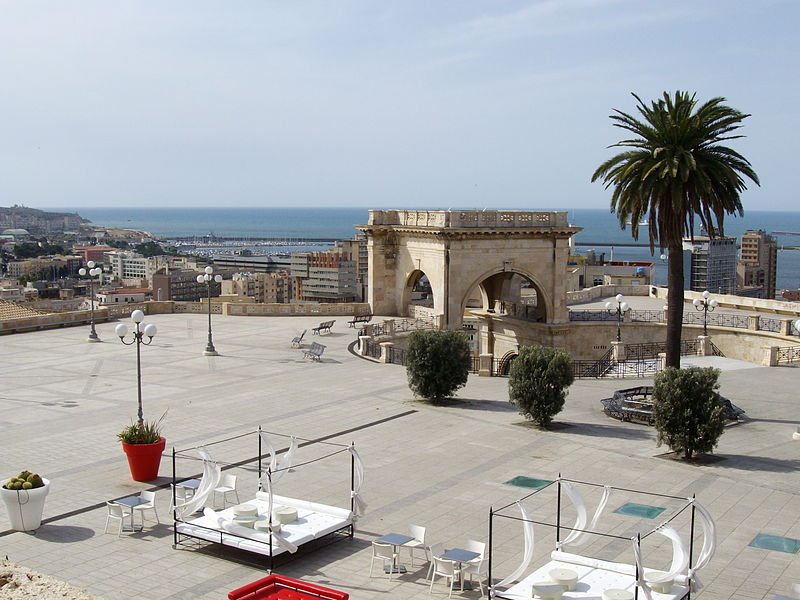 The “Terrazza Umberto I” (Cagliari) on the map: